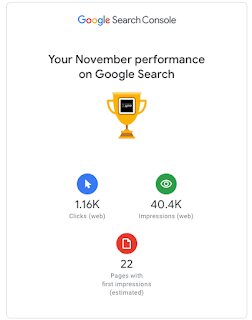 Google has relatively recently started sending a month end summary of Google search performance to Webmasters who use the Google Search Console. See the picture for an example of the headline stats.

One of the metrics it lists at the top of the summary section is 'Pages with first impressions (estimated)'. But what does this mean?

Thankfully there's an accompanying explanation from Google themselves, if you dig hard enough:


Pages with first impressions: Pages that were seen by a user in Search Results for the first time last month. (This may be omitted for very large sites.)

So, these are pages that have only started appearing in the search results this month - they may indeed be old pages that simply haven't appeared in search results as they are not sufficiently well ranked to appear to end users themselves.

And to be clear 'impressions' means that the results have been shown to a user in their Google search results, not that they necessarily have clicked on them.

The reason why could be a combination of factors: very specific searches meaning that page is a relevant search result; tweaks to the pages themselves; updates to the Google algorithm; changes to the overall site ranking that affect the likelihood of one of the site's pages appearing above a competitor.

It does lead to the question of which pages these are precisely. Unfortunately, there's no link to a corresponding page in the Google Search Console even though the rest of the report features a number of links offering more detail on the monthly email overview of performance.

In terms of the overall report, if you're puzzled as to why you are seeing this for the first time, then not only is it relatively new in 2019, but also you'll only receive it if the site has been registered with Google Search Console for three months or more.

Uber to trial recording audio of rides - what could possibly go wrong? 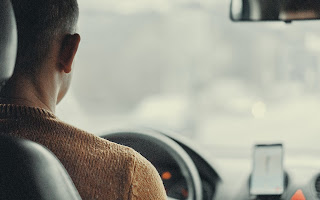 News in that that Uber is to trial audio recording of rides in Brazil and Mexico in a move that could see it rolled out to other territories.

The reasoning behind the move is that it might increase driver and passenger safety and help to arbitrate in disputes or criminal acts during the journey. There is logic to this, but there are also numerous concerns with the trial:

- Privacy: concerns over your personal conversations being recorded and stored on Uber's services
- Data: the audio would be recorded on the driver's device and then passed as encrypted files to Uber -  what about the cost of the data on the driver's data plan?
- Encryption: this is a minimum but what if the recordings are hacked in a data breached and the voice recordings and voice print of the users are used for nefarious purposes
- Opting-in: what about your consent to have your voice recorded? Can you opt-out

On the face of it, it looks like a legal minefield and raises all kinds of privacy concerns even if the intention behind it is a positive one.
Posted by Chris at November 21, 2019 No comments:

Pirating of The Mandalorian set to break all records 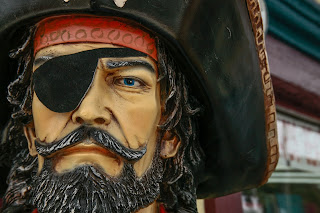 The Star Wars juggernaut is coming to a small screen (possibly not) near you with the release of The Mandalorian as part of the launch of Disney+.

Disney+ is yet another streaming service set to compete with the giants of Amazon Prime, Netflix, Apple TV+, Hulu and the rest. It's only available in a few countries at launch (Canada, Netherlands, Australia, New Zealand and USA) due to pre-licensing deals and won't reach the UK until March 2020.

The Mandalorian is the latest iteration of Star Wars since Disney acquired Lucasfilm back in 2012 for just over $4 billion. Disney are hoping that it is one of the crown jewels that will drive new subscribers to its Disney+ service as loyal fans follow the content.

With the exclusivity to Disney+ and the limited geographical distribution coupled to the popularity of the Star Wars series, it is predicted to set new records in piracy as frustrated fans seek how to download The Mandalorian any way possible.

While the streaming services have gone a long way to reducing piracy and increasing the options available to fans wanting to watch their shows legally, we are entering an era of increasing fragmentation with hit shows spread across the different platforms and fans understandably reluctant to fork out for multiple streaming services.

It does beg the question of whether a new one-streaming-service-to-rule-them-all might emerge with a higher monthly fee to access all shows. At present it's unlikely as the services compete for market share and ownership of customers. However, user experience combined with content are king. Fans want easy access to their favourite shows and even if you did have multiple accounts it's a challenge keeping up with which show is appearing where.
Posted by Chris at November 14, 2019 No comments:

Internet communications of the future - fake it till you make it

As artificial intelligence improves and the human-generated content can be increasingly mimicked, will there be a time when what is real and what is fake merge into one morality-free mess?

Certainly the trend is moving in that way.

Increasingly through Natural Language Processing we have entered a time where structured data can create article content at scale and while it may still lack the nuances and ambiguity of human characteristics, it is getting close. Particularly for drier, fact-based content, like aggregated news headlines, rolling sports reports and financial data.

And in the video sphere, not only can celebrities and politicians be increasingly convincingly mimicked, but also individuals can transform themselves into someone else on video chat.

Take for example the story of the Chinese vlogger, the wonderfully named Your Highness Qiao Bilou, who used a filter to portray herself as a young, glamorous woman only to be unmasked as a middle aged, slightly less glamorous version when a glitch removed the filter mid-chat. Fair play to her you may say for exploiting the shallowness of her fee-paying audience, but it only emphasises the point of not taking things at, literally, face value.

So, are the machines taking over once and for all? No, at least not for quite a while yet.

What can be automated, will be automated, but authenticity is going to become increasingly valued over utility.
Posted by Chris at November 01, 2019 No comments:

Having started using Chrome again, there remain a few of irritations.

- The first and perhaps most annoying is that the mouse-pan doesn't work in Chrome.

- A more minor irritaiton for those of us that use multiple browsers is the order of the right-mouse menu bar with 'new tab' and 'new window' swapping positions. More logical in Chrome.

- Finally on an old PC where memory is a constant problem is that processes still run after the browser is closed
Posted by Jason Benali at May 01, 2009 1 comment:

After an initial underwhelming test of Google's Chrome browser, memory issues with other browsers have forced me back for a second look. There are now workarounds to adding the likes of Delicious buttons (simple bookmarks do fine), but the main attractions are the load speed of pages and the independent tabs which can crash in isolation.

The result - less 'not responding' errors, a quicker browser and once you get used to the UI a compelling competitor.

I'm still sticking with Firefox in the main, but will certainly be making more and more use of Chrome.
Posted by Jason Benali at April 29, 2009 No comments:

Google is adding colour filters to its image search. To use it look for the 'all colors' bar underneath the search box in image search and click on your colour.

The colour palette available is pretty limited, so it's questionable just how useful this is when you could add colour into your search term in the first place. For some, however, it could be a good way to filter your results quickly when trying to find the best colour of an object.

Either way it's a small step towards visual search, such a challenge in search where the search engine will analyse an object for its meaning beyond the metadata available (e.g. photo of red car only tagged as 'car').
Posted by Jason Benali at April 27, 2009 No comments:

There's a good chance you will now with the announcement that the Google homepage now appears in over 100 languages.

Interesting to read in the story of adding Maori to the list of languages that it takes more than 1,600 phrases to translate Google's search interface - 'search'; 'I'm feeling lucky' that's two, how many more do you need! It's been a labour of love to add Maori to the list and there is no doubt considerable pride that it is now added to the list.
Posted by Jason Benali at August 01, 2008 No comments:

Google has released several updates to their enterprise search product, Google Mini. More details are available on a post on their blog, but essentially it involves the ability to search in shared drives, weight documents by date or value and comes with support for six new languages.

Shared drives support is the big one given the number of documents stored in this locations in corporate environments.

More details on the enterprise blog.
Posted by Jason Benali at May 28, 2008 No comments:

Embarrassingly it's been a year since my original experiment in blogging was updated. In fairness, I now edit two other sites and this mixture of tests, comment and even analysis has fallen behind in terms of priority.

The site still gets a regular stream of traffic from some of the better pieces in terms of content and SEO practice, so rather than kill it off I'm going to remind Google and co that it still exists.

I may well continue to do the odd update from time to time on topics outside of my current web publishing interests, so keep subscribed to the RSS feed and hopefully good things will come to those that wait.
Posted by Jason Benali at May 27, 2008 No comments:

Where's Germany? Why, it's right here

According to Google, it's right here on this blog. A quick look (UK settings) shows Netcoms Dot Com as the number two result for 'Where's Germany'.

I was surprised to see the amount of traffic coming through for this term after this post started the ball rolling. No doubt a mixture of a recent post, plus the keywords in the title tag. Let's see how long it lasts.
Posted by Jason Benali at July 10, 2007 No comments: